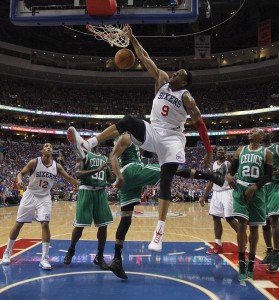 The series that sparked the 2001 Finals run began in an unlikely fashion. Reggie Miller drilled a three with three seconds left to give the Indiana Pacers a 79-78 win over the 76ers in game one. The Sixers entered the playoffs as the top team in the East. The series remained close throughout except for an 18-point win in game two, where League MVP Allen Iverson poured in 45. The remaining games were decided by less than five points, and the Sixers did not drop another game that series. This grit really helped them with the upcoming Raptors series with their superstar Vince Carter. The Pacers series put the league on notice that these Sixers were not just a regular season team, but they could hang with the best and grind out victories even if Iverson did not have his best game.

No. 9: Game Six Against the Raptors

This moment might have been higher on the list, but it is impossible to consider it without thinking about what happened in game seven. The Sixers entered game six of the series having dropped the prior two contests and facing elimination. The Sixers turned in an amazing display of teamwork. All five starters scored in double digits, and that led the Sixers to a 112-101 victory. The hype after the game and before game seven was unreal. Fans truly believed a victory in game seven meant a Finals trophy. This game inspired an entire city and cultivated everyone around this team for the first time since 2001. Despite losing the series the Sixers changed from being loveable losers to true contenders.

No. 8: The Confetti Game

Before I start with this one, let me just say I know this series sucked other than this game with the Sixers getting bounced in five. But this game was fun. Bitter rivals faced off when the Sixers took on the Celtics in Philly’s return to postseason action. Coming in high off the series victory over Miami, the Sixers lost three straight to open the series. This game was different, though. It was close throughout and with just under two seconds left the Celtics took a two-point lead and it looked destined to go up 3-0 and sweep the series. Marco Belinelli hit a buzzer-beater and everyone was excited for overtime — except the person operating the confetti cannon. Confetti flew into the air, delaying the start of the extra period nearly 10 minutes. While the Sixers would end up losing the game, this inspired victory in game four.

This one holds a special place in my heart, being the first playoff game I ever attended. Regardless, this series had it all. Dominating Sixers wins, rough physical play, pin-point shooting from deep — no matter what you like to see, it had it. Coming off another 50-plus-win season, the Sixers were looking to make some noise in the playoffs. Many said it was Conference Finals or bust, and while that did not exactly come true — thanks, Kawhi Leonard — the 76ers dominated in round one. After making a handful of major roster moves throughout the season, it seemed like the Sixers put it all together in the Brooklyn series. Finally, they came together as a unit and lived up to their potential. This series was a big part of the reason the Raptors series even went to seven games.

Vince Carter is one of the best to ever play the game. In 2001 Carter was in the prime of his career leading the Toronto Raptors. In the Eastern Conference Semifinals, Carter matched up with MVP Allen Iverson and the rest of the 76ers. Iverson put up unreal stats this series — 33.7 points per game, 6.9 assists per game, 3.1 steals per game and averaged 46 minutes each night. Carter averaged 30 points, 6 rebounds and 5.6 assists. Iverson and Carter provided a matchup of guards carrying their teams. In game two, Iverson dropped 54 to give Philly the win. Carter responded with 50 in game three. The series was back and forth the whole way. The Sixers were able to win in seven games, giving them a matchup with the Bucks for the right to go to the Finals. This is one of the best conference semifinal series in the history of the 76ers.

No. 5: Eastern Conference Final Win Over Bucks in 2001

Almost two decades removed from their last finals appearance, the Sixers had league MVP Allen Iverson. Despite a poor start to the series, Iverson was able to show why he won the MVP award. Up 3-2 in the series, the Sixers were looking to close out the Bucks at home. It looked like a lost cause when they went into the fourth quarter down 26 points. Iverson would not let the Bucks win this game easily though. He single-handedly scored 26 points and made that contest a close game. This triggered Iverson to score 44 points in game seven and propel the 76ers to their first NBA Finals appearance in 18 years. Iverson was able to carry that hot-hand into the Finals and gave the Lakers their first loss of the postseason in game one.

The 2012 season was shortened due to a disagreement between players and owners about salary. The Bulls still amassed 50 wins in 66 contests, one of two teams to hit the 50-win plateau. The Bulls had reigning MVP Derrick Rose and one of the best big men in the league, Joakim Noah. The 76ers were led by two young up-and-coming stars in Jrue Holiday and Andre Iguodala — the team won 35 games and barely snuck into the playoffs. Despite the odds being stacked against them, the Sixers prevailed in the series 4-2, becoming just the fifth eight seed to knock off a first seed. While they were aided by Chicago facing injury woes, the Sixers proved they belonged. The team showed promise for the first time in years and that continued when they lost to the Boston Celtics in the next round in seven games.

No. 3: The Process 76ers Get Their First Playoff Win

In the 2018 playoffs, the 76ers won their first series in their first playoff appearance since 2012. The Sixers barely won over 100 games total from 2012 to 2017. In the 2017-2018 regular season the Sixers won 52 games, which gave them the three seed in the playoffs. A process that endured years of fans suffering and taking draft picks left Philly with a solid young core. In 2017 they put it together. A couple of successful midseason pickups helped the Sixers trounce the Miami Heat in five games. But the team was led by Ben Simmons, Dario Saric, Robert Covington, fan-favorite TJ McConnell and The Process himself Joel Embiid. Some said that the following year when the Raptors beat the 76ers in heartbreaking fashion was the end of the process era, but the players consider it to be a series victory — now, it is about titles.

Everybody knows Allen Iverson’s famous rant, “We talkin’ bout practice. Not a game. Not a game. Not a game. We talkin’ bout practice.” Very few people remember when it occurred. The Sixers had just been bounced from the playoffs in a win-big-or-go-home game five (back then, first round series were played best of five games) and Iverson received a question about him missing practices during the season. Iverson was dealing with the loss of a close friend throughout the season. His disagreement with management is well documented and ultimately was his reason for leaving Philly late in 2006. Nonetheless, this rant is still iconic and every sports fan has cited it at least once in their life. Iverson left a major impact on the city and pop culture in general — this one might have been one of his best.

No. 1: Allen Iverson steps over Tyronn Lue in the 2001 NBA Finals

Not only is this one of the most iconic plays in the history of the Philadelphia 76ers, it is one of the most iconic images in the history of the NBA. AIlen Iverson carried the 76ers to the 2001 NBA Finals against a Los Angeles Lakers team featuring Kobe Bryant and Shaquille O’Neal. Iverson’s running mate was an aged Dikembe Mutombo. The Sixers won the game in overtime but it was not easy. The Lakers opened the extra period with five straight points before Iverson took over. Scoring seven points, he willed the Sixers to victory. After dribbling right Iverson planted his left for a step-back jumper. Tyronn Lue fell to the ground and Iverson took an empathic step over him — sealing the victory. Although the 76ers would lose the series, this is one of the most iconic moments in the history of the NBA.