Are All Voices Being Heard? | The Triangle

Are All Voices Being Heard? 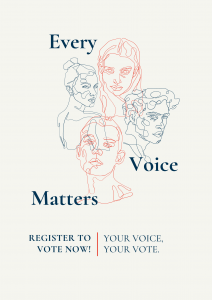 Do you agree that a vote can shape the future of tomorrow? Voting is a right to have a say in society, and we have the freedom to exercise our rights. Election day is not too far off, and then we will receive the outcome of the United States presidential election.

U.S. citizens will choose their desired representative for president through elections on Nov. 3, 2020, to either elect a new president and vice president or reelect the incumbents.  Due to the COVID-19 pandemic, campaigning and traditional polling took a backseat. Will this impact the voting results? Donald Trump, who repeatedly refused to wear a mask and mocked former vice president Joe Biden, recently tested positive for COVID-19. The president downplayed mask-wearing, and, after his irrational actions, Biden, said during the Sept. 17 CNN town hall, “If the president had done his job from the beginning, all the people would still be alive.” What impact will this have on the election? Should we elect Trump again so that he can right a wrong, or is Biden capable of restoring the economy?

We all have questions regarding the election and our futures to which the answers are uncertain. The pandemic has impacted our economy, and in order to fully recover from it, we must have a free and fair election. We all know and have been told that each vote counts. Therefore, everyone should be well informed and pragmatic before dropping the vote in the ballot box.

To benefit from this election, citizens need to elect the candidate who is the best fit for the job, not just the person aligning with our party’s standard beliefs and policies. You must cast a vote for the candidate who will support your values and ethics. However, be meticulous about what you read and choose to believe. We are living in the modern world of social media, be sure that any information you wish to pass on is accurate.

If we were to look at voting as an economist and we do a cost-benefit analysis, then if the cost outweighs the benefit, people are less likely to participate as a consequence. We often hear that even the eligible voters do not vote because they find the election process time-consuming and inconvenient. Moreover, due to time conflicts or even transportation, people often experience some obstruction when it comes to voting. People appraise costs as being too high for the benefits and choose not to vote.

It goes without saying that there are groups of individuals who want to vote, but they are unable to do so. The electoral college system barred the people residing in U.S. territories from voting in the general election. Socioeconomic barriers also restrict many individuals from voting. Also, people still think that an individual vote does not impact the government. Is this a fair election?