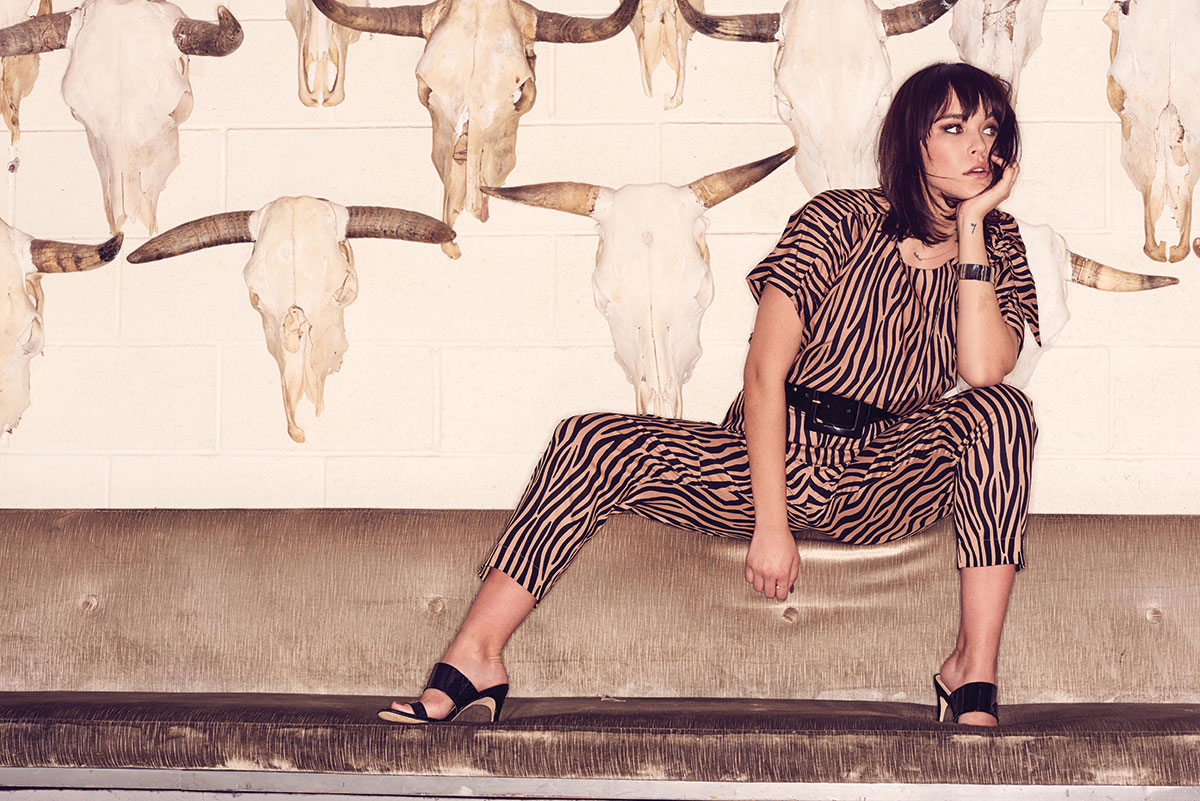 The Triangle had the opportunity to talk to on-the-rise pop artist Upsahl while she was on tour with Max Frost. She discussed her songwriting process, her new EP and what it’s like to be the opening act.
This interview has been edited for grammar and clarity.
The Triangle: When did you start writing songs?
Upsahl: Well, I started writing s—ty songs when I was like seven or eight, I’m sure. My parents got me a guitar when I was like six, and I was like strumming on that thing. But, I really started to take music seriously once I got into high school. I released a couple of albums on my own and started playing a bunch of shows in Phoenix and stuff. Then I started writing songs in sessions and collaborating with other writers and producers just in this past year really, when I moved to Los Angeles.
TT: Was there something that pushed or inspired you to take music as your main focus?
U: I grew up in such a musical household and had access to so many instruments. Music was just always such a big part of my life that it was never really a decision I made like “I want to be a musician; this is what I want to do.” It was just always the thing that made me who I was.
I went to a college prep school since I was 10, so I thought I was going to college like literally for eight years while I was going to this school. Then toward the middle of my senior year, I just sat down and was like “What am I doing? Why don’t I just do music full time? What’s the point right now?” Then I really got into it and moved to LA. Now I just get to make music every day. It’s so fun.
TT: You said you grew up in a musical household. What kind of music were you listening to and being surrounded with?
U: My dad was in punk rock bands when I was really little, so I was surrounded by that a lot. Whenever bands would be on tour and coming through Phoenix, they would crash at my house, and I would be hanging out with these punk rocker guys in the morning. I was definitely around that vibe a lot.
I listened to a lot of alternative music growing up, stuff like Weezer and The Shins. I love the Shins. Spoon was a big one for me. It was definitely a lot of alternative music, and I feel like now that I’m making more pop music, that alternative influence of where I came from still makes its way into the music.
TT: How do you usually approach songwriting?
U: I guess it just really depends on the day and who I’m working with. I’ve been so honored to have worked with the coolest producers and writers within this past year, and I’ve just met such amazing people. It literally depends on the session. Sometimes we’ll roll in, and I have an idea for a bass line or whatever, and we’ll go with that, or my co-writer will have an idea for a title, and we’ll start with the melody and write a track to that. There’s never really one way that we do it; it just depends on the day. And that’s what’s so exciting about it. You really never know what to expect, which I love.
TT: For people who have never heard your music, how would you describe your sound?
U: I feel like it’s a mixture of many different genres. It’s definitely pop, it has alternative vibes, it has some urban leaning vibes. But overall, I think my goal as a writer and as an artist is just to make people feel empowered.
I feel like this EP is very much that. With the track “All My Friends Are Rich,” it’s embracing being broke. There’s “Stressed,” which is embracing being really stressed. The song “Fine” is looking back on a past relationship and recognizing the flaws that you had within that and being able to own up to that. I just feel like everything on the EP is empowering, and that’s how I want people to feel when they listen for sure.
TT: You just released your first EP. What was the process like curating a collection of songs?
U: Yes! It was a trip because basically that EP came together by us looking at the 200 something songs that I wrote last year once I moved to LA and just picking the ones that best represented me right now. And I think that’s what’s so fun about it. Literally all the songs are written within the timespan of a year. Within that year I moved to LA, I entered into my 20s, all the relationships in my life were changing. Because songwriting is very therapeutic for me, that EP and those songs ring true to how I was feeling literally the day that I wrote them.
TT: Yeah. Which song of the tracks that you have released so far means the most to you? Why?
U: I would probably say “Drugs” is a song where the day I wrote it, I was just like “This song is the s–t.” I’m most proud of that song. It’s the kind of song where I feel like I can show it to anyone, and if they tell me they don’t like it, I can confidently tell them that they’re lying. I love that song.
The song that is closest to me I feel would probably be “Fine.” I feel like it’s the most raw. It is very truthful and very vulnerable. I love performing that one live. That song I feel like is the most me, for sure.

TT: How has your experience opening for Max Frost been so far?
U: It’s been so fun. I’m obsessed with being on the road. I could do it for the whole year if I were able to. It’s very exhausting. It’s very high energy levels 24/7. But, it’s so fun, and getting to perform every night really makes everything worth it.
It’s weird because the past year, I’ve been in the studio and writing everyday. I was not performing live at all. I kind of think I forgot how much I love being on stage. Then the first show of the tour, something clicked in my head and I was like, “Wow this is so addicting.” I could do it all day long.
TT: I always think it’s gotta be a weird position to be in as the opening act. Have you found it intimidating or anything?
U: It’s definitely intimidating because you have all these people who aren’t there to see you at all. You kind of have to sell them on it. It’s been really cool because I’ve gotten to meet so many people. After shows, I always make a point to go and hang out with people. Having people walk up and be like “Hey, I’ve never heard of you until tonight, but I love your EP, and I just added it on Spotify.” That’s so exciting. You’re literally meeting a new fan who just heard of you that night, and they’re into it.
It’s intimidating going into a crowd knowing that they’re just waiting to see the headliner. They don’t really care about you. But, it’s cool to see their reaction after and seeing these people that are into it. It’s really powerful for me.

TT: What inspires you outside of music? Are there any people, movies, books, etc.?

U: I don’t know. I take inspiration from anything around me. If I’m having a conversation with someone, and it’s like late at night and we’re drunk or whatever, and they say something cool, I make sure to write it down on my phone. I really just try to be aware of everything that’s going on around me at all times.
As far as film, the first time I saw “Pulp Fiction,” I was very inspired by the vibe. Taking the energy of certain characters and trying to embody that into a song was really fun. But mostly, it’s just me trying to stay aware of everything going on around me as much as possible. If someone says something cool or I see some s–t go down, put that into a song.
TT: Who are some of your favorite artists that you would recommend people check out?
U: Billie Eilish, for sure. I love her new album. It’s amazing. Her visuals are incredible. She’s such a badass. Mac Miller’s “Swimming” album was very inspirational for me. I love Outkast. I’m trying to think of other badass artists. Still Woozy. Radiohead is always a good one. I don’t know, just like a mixture of all the genres in the world. But, Billie Eilish is the s–t right now. She’s so cool.