“Tenet” is an ambitious and groundbreaking theatrical experience | The Triangle

“Tenet” is an ambitious and groundbreaking theatrical experience 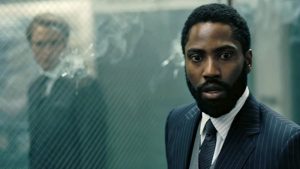 Since he burst onto the scene with “Memento” back in 2000, director Christopher Nolan has made a name for himself by altering how his characters and audience experience time in his films. This is present more than ever in his newest film “Tenet,” a spy movie which centers around a concept called inversion by which certain people and objects experience time backwards. The final product is an intriguing and exciting action movie with a relentless pace that, while very complex and potentially confusing, makes for an excellent theatrical experience.

John David Washington stars as a special agent known only as The Protagonist who is tasked with stopping a Russian arms dealer (Kenneth Branagh) and his allies in the future from using inversion to destroy the earth. The plot moves quickly and works through a lot of complexities, especially involving the nuances of inversion. This complexity is perhaps the film’s greatest shortcoming, coupled with the way that the sound mix sometimes drowns out expositional dialogue with score or other sound effects. So unfortunately, it is not a movie that most viewers are likely to follow completely on first viewing.

There is not a whole lot in this film in terms of compelling character drama. The characters themselves are well-constructed and it is possible to track their motivations both while watching it and in retrospect, but the story centers much more around the chaotic situation they are all caught up in rather than any kind of meaningful arcs. However, Nolan has clearly put care into these characters and creates a group of allies that are engaging to follow, helped in no small part by the all-star cast that plays them. To say that character is a weak point of the story might be an exaggeration, but it is unlikely that any character will be the thing to hook you in or bring you back for more.

That said, “Tenet” delivers a theatrical experience that is hard to match. Though it avoids some of the flashier visuals of most action films in favor of Nolan’s more grounded style and practical effects, the scenes involving inversion have some visually stunning moments that are unlike anything that can be found in any other movie. The action scenes break new ground in terms of choreography and feature some incredible practical effects. And where the sound of the film lacks in dialogue, it delivers in combining score and sound effects to create an immersive soundscape.

Having seen this first in IMAX and later in more standard format, I highly recommend seeing it in IMAX while it is still in theaters if you can do so safely rather than waiting for it to be released digitally. As mentioned, it is difficult to follow, but this is a movie that is made to be seen in IMAX or at least in a theater.

Although I will have to spend a bit more time with it to fully wrap my head around it, I can safely say that it is an ambitious but imperfect film. However, in a cinematic landscape that is trending away from original stories, it is refreshing to see Nolan taking advantage of his unique position and using his massive budget and creative freedom to make something truly original that has never been seen before and could not be created by anyone else. I will not defend it as one of his best films, but I will definitely be revisiting it in the coming months and will absolutely welcome a sequel if and when one is made.