“Rebecca” is another bland remake. | The Triangle

“Rebecca” is another bland remake. 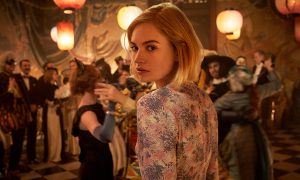 As if the live-action “Mulan” and misguided “The Witches” remake weren’t bad enough, Ben Wheatley (“Kill List”) has directed a mediocre remake of “Rebecca” — proving once again that Hollywood doesn’t know better than to mess with a good thing.

“Rebecca” is based on the 1938 novel of the same name by Daphne du Maurier, making it more of a re-adaptation than a remake. However, any film adaptation of “Rebecca” inevitably invites comparison to the Best Picture-winning 1940 movie directed by none other than Alfred Hitchcock. One might say that — much like the second Mrs. de Winter — this new arrival was destined to live in the shadow of the original.

Like Hitchcock’s adaptation, “Rebecca” (2020) is faithful to the novel. The unnamed protagonist marries wealthy widower Maxim de Winter after a whirlwind romance. However, she can’t seem to compare to Maxim’s beautiful and sophisticated first wife, Rebecca, whose memory is kept alive by the villainous housekeeper, Mrs. Danvers. As she struggles to settle into her new role at Manderley estate, the second Mrs. de Winter begins to uncover the sinister truth about Maxim’s first marriage.

Du Maurier’s “Rebecca” is a classic of Gothic fiction. While it has been called a romance, the story is more of a psychological thriller. The relationship between Maxim and the second Mrs. de Winter is far from romantic. From the beginning, Maxim berates and infantilizes his wife, flying into rages when she makes a mistake. Once the honeymoon period is over and Maxim shows his true colors, it is clear that the second Mrs. de Winter is in over her head. A sense of dread and oppression pervades both the text and the 1940 film.

By contrast, Wheatley’s “Rebecca” is a historical romance that occasionally remembers it’s supposed to have Gothic elements. From time to time, Wheatley throws in an unimaginative dream sequence or an ominous flock of unconvincing CGI birds. For the most part, however, the movie feels like a BBC historical drama. The central romance is shockingly stable and mostly devoid of tension. The second Mrs. de Winter, portrayed as meek and submissive in the original, is downright assertive, confronting Mrs. Danvers more than once and even breaking the law on her husband’s behalf.

While divergence isn’t a bad thing, the changes here feel aimless. The script makes an effort to be progressive, but the original was plenty progressive enough. Du Maurier also commented on issues of class and gender; whereas she and Hitchcock relegated their commentary to subtext, this version simply makes it text. These changes crucially weaken the story. For tension and dread to build, it is important that the second Mrs. de Winter be vulnerable. While it was satisfying to see the protagonist come out of her shell over the course of the movie, you never really believe she’s in much danger.

Similarly, the cast struggles to remain true to the spirit of the novel while bringing something new to the role. Lily James is perfectly fine as the second Mrs. de Winter, although her performance can’t compete with Joan Fontaine in the original. Armie Hammer as Maxim is… there. The strongest cast member is acclaimed actress Kristin Ann Scott Thomas, who makes for an imposing (yet surprisingly sympathetic) Mrs. Danvers.

There are, of course, several aspects of the film that work well. For one, “Rebecca” is even more visually striking than the original, with lavish sets and gorgeous costumes. The original twist in the book, which could not be filmed in 1940 due to censorship, was preserved. The queer subtext many see in the source material becomes text in this film, a subtle change that worked well. There are also, notably, twice as many dogs in this movie than in Hitchcock’s adaptation. It’s not enough to keep you from thinking about Hitchcock’s version, however.

A “Rebecca” remake — maybe a miniseries — could be worth watching. However, rather than trying to do something new and bold with the material, the film makes minor updates that are largely ineffective. If only someone involved had taken to heart the lesson the second Mrs. de Winter learns — there’s no use trying to imitate “Rebecca.”