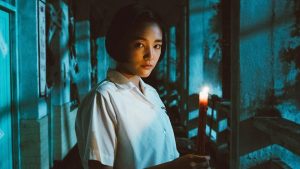 This past weekend, I kicked off Spooky Season by attending Nightstream, a virtual film festival for horror fans presented by the Boston Underground, Brooklyn Horror, North Bend, Overlook and Popcorn Frights Festivals, all of which were cancelled earlier this year due to the pandemic. The festival ran from Oct. 8 to 11, with select films and events available to watch on demand through Oct. 14 — a perk of the virtual format.

Alongside films from new and veteran filmmakers, Nightstream also included similar genres like sci-fi, fantasy, thriller and underground. My favorite films from this line-up were those that pushed the definitions of their respective genres. One of my big takeaways from Nightstream is that the horror genre is increasingly difficult to define, with many filmmakers preferring to label their films simply as “genre.” If the films shown at Nightstream represent the future of horror, I could not be more excited.

Another highlight was “The Returned,” a fresh take on a zombie film by director Laura Casabe. Set in 1919 Argentina, the film follows a plantation owner’s wife who calls upon a mythological force to resurrect her stillborn son. “The Returned” feels like an A24 film — beautifully shot, deliberately paced and genuinely unnerving. At the heart of the film is a powerful metaphor for colonialism and the oppression of indigenous people in Argentina.

The biggest surprise for me, however, was “Climate of the Hunter, from prolific indie director Mickey Reece. His latest effort is a stylish 70’s throwback about two sisters whose relationship crumbles when an old friend (who may be a vampire) comes to visit. It’s a moody, character-driven drama full of dreamlike imagery, bewitching performances and (for whatever reason) an absurd number of Jell-O molds. While this film may emphasize style over substance, the visuals are dazzling and the storytelling is enthralling.

Besides films, Nightstream offered a combination of live and prerecorded panels, podcast recordings and other horror-themed events. These events may have been my favorite part of the festival. Of course, there were some issues with lag, but the chat was lively and there was a great sense of community despite the virtual format. One of my favorite moments happened during the Strange Storytelling Hour hosted by the Northwest Film Forum. While waiting for everyone to connect to the Zoom call, the panelists took turns showing off their pets and invited attendees to do the same. It was shocking how easy it was to make a connection with a group of horror-loving strangers all gathered around their laptops.

The panels and discussions covered a wide array of topics, with some of my favorites including “The Future of Horror is Female,” “Horror Camp!” (about campy horror films and why we love them) and “Making COVID Work: How to Create During a Global Pandemic.” Other events included a panel on Indonesian horror, a conversation with Nia DaCosta (director of the upcoming “Candyman” remake) and a virtual dinner party with horror legends Mick Garris (“Masters of Horror”), Mike Flanagan (“The Haunting of Hill House” and “The Haunting of Bly Manor”), Tom Holland (the filmmaker, not Spiderman, behind “Child’s Play”) and more.

Overall, my experience was surprisingly smooth. I was expecting more technical difficulties, and while there were a few bumps in the road, I don’t have any real complaints. Of course, an online festival or convention will never be the same as an in-person event. But, all things considered, Nightstream was a fun way to kick off Spooky Season with people who love horror just as much as I do. There’s no telling what the world will look like next October, but if Nightstream returns in 2021, I absolutely plan to attend.