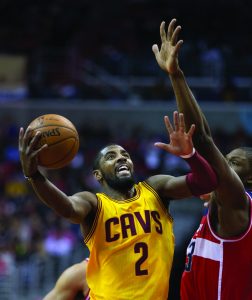 During this hiatus from the NBA due to the coronavirus, fans have been given the opportunity to reflect on games of the past. Over the past 10 years, there have been over 100 games that are considered “classics.” Of those games, there were 10 that stood out from the rest.

To start things off in the top 10 list is game five of the NBA finals in 2016 between the Cavs and Golden State Warriors. The Warriors had a 3-1 lead over the Cavs and were at home looking to close the series. However, Lebron James and the Cavaliers had other plans as the King erupted for 41 points, 16 rebounds, and seven assists. James wasn’t without help in this game as Kyrie Irving also had 41 points in the game. The Cavaliers ended up winning the game 112-97. This series went on to go to game seven, which will be talked about later on in the article.

This regular-season game featured Kevin Durant and Russel Westbrook vs Steph Curry, Klay Thompson and Draymond Green. Durant was going against his now-former team. The game went into overtime, only for Curry to hit a three from farther than 30 feet away in the final seconds to give the Warriors the 121-118 victory. Curry finished the game with 46 points, including 12 three-pointers.

One of the all-time classic games to start off this decade. In this game, Kobe Bryant wound up winning his fifth NBA Championship. Leading the Lakers was Bryant with 23 points. The game was a back-and-forth, low scoring defensive battle. The unlikely hero from this game was Metta World Peace, previously known as Ron Artest. Known for his defensive play, Artest displayed his offensive abilities going for 20 points, which included hitting a huge three-pointer late in the fourth quarter to seal the Lakers’ 16th championship in franchise history. The final score of the game was 83-79.

In game four of the first round of the 2011 NBA Playoffs, the Blazers and Mavericks indulged in a classic game. Down 23 Points with 15 minutes to go in the game, the Portland Trail Blazers had a miraculous comeback led by Brandon Roy to get the victory. Roy scored 18 of his 24 points in the fourth quarter. The Blazers went on to beat the Mavericks 84-82.

While this game did not have any influence over the playoff’s importance or standings, it was about the individual involved in the game. That individual was Kobe Bryant, and this game against the Jazz was his last not only at the Staples Center but also of his career. The Black Mamba went out the only way he knew, and that was by getting buckets. Bryant led the Lakers to a 101-96 victory finishing the game with an unbelievable 60 points.

No. 5: Portland Trail Blazers vs. Houston Rockets, Game 6 of the NBA Western Conference Playoffs, May 1, 2014

In game six of the NBA Western Conference Playoffs, Damian Lillard made his presence felt to the whole NBA, and began his journey as a superstar. A back-and-forth game between the Rockets and Blazers came down to the wire. Chandler Parsons had just given the Rockets the lead with 0.9 seconds remaining in the game. Even with less than a second remaining, it was still “Dame Time” as Damian Lillard responded to Parsons by making a three-pointer in his face at the buzzer, sending the Blazers to the Western Conference Finals.

The Heat were down 3-2 to the Celtics and had to go on the road to Boston. The Celtics were a team that LeBron James had struggled to get past in the NBA Playoffs in previous seasons. James’ legacy was on the line in this game, and he showed up in the biggest way possible to lead the Heat to a 98-79 victory. James was spectacular, putting up 45 points, 15 rebounds and five assists.

This series was between the newly established Big Three in Miami, consisting of LeBron James, Chris Bosh, and Dwayne Wade as well as a Mavericks team made up of older veterans like Dirk Nowitzki, Jason Kidd, Jason Terry and Tyson Chandler. In game two of the Finals with the Heat leading the series, it looked as though Miami was going to take a 2-0 lead. In the fourth quarter, the Heat were up by 15 after Wade hit a three and then posed in front of the Mavs bench with only seven minutes left in the game. Then, all of a sudden, the Mavericks flipped the switch and went on a 22-5 run led by Nowitzki, who hit the game-winning layup to give the Mavericks the 95-93 win.

An all-time classic between two teams who dominated that season: the Miami Heat, led by LeBron James, and the San Antonio Spurs, led by a young Kawhi Leonard. The game was a seesaw battle that wound up going into overtime thanks to an unbelievable three hit by Ray Allen after Chris Bosh grabbed a huge rebound. Allen’s three was controversial, as many thought it was a travel before he shot the ball. In the first three-quarters of the game, James was 3-for-12 shooting, but ended the game with 32 points on 11 of 26 shooting. The Miami Heat ended up winning the game 103-100.

What is undoubtedly considered one of the greatest games of all time is game seven of the 2016 NBA Finals between the Golden State Warriors and Cleveland Cavaliers. This game had all the tension and drama leading up to it, with the beef between LeBron James and Draymond Green, Klay Thompson saying James got his feelings hurt and the Cavs being down 3-1 in the series. Game seven also happened to be Father’s Day, and as my dad said, “I couldn’t have asked for a better Father’s Day present.” The game was back-and-forth all the way down to the wire. The Warriors were the favorites coming into the game as the first team in NBA history to win 73 regular games. The challenge of playing one of the greatest teams of all time and being down 3-1 was not too much for James and the Cavaliers. James had one of the greatest blocks in finals history chasing down Andre Igoudala with 1:50 left in the game. Moments later, Kyrie Irving hit a step-back three right in the face of Steph Curry to give the Cavs the lead with 53 seconds remaining. The Cavs ended up winning the game 93-89, giving Cleveland its first championship in 52 years and making the Cavs the first team in NBA history to come back from a 3-1 deficit in NBA Finals History. Irving finished the game with 26 points and six assists, while James had 27 points, 11 rebounds and 11 assists.