Have The Eagles Done Enough To Address The Wide Receiver Position This Offseason? | The Triangle

Have The Eagles Done Enough To Address The Wide Receiver Position This Offseason? 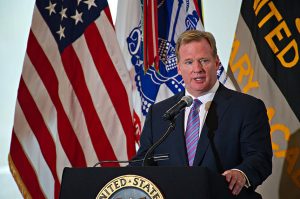 From April 23 to 25, the first ever virtual NFL draft took place. Over the three-day period, a record audience of 55 millionwatched the event. The first few picks went as expected, with Joe Burrow going to Cincinnati Bengals with the first pick and Chase Young going to the Bengals with the second overall pick. What was surprising in this draft was the first two picks made by the Eagles.

The expectation among Eagles fans and football analysts was that the Eagles were going to take a wide receiver. The Eagles did in fact draft a wide receiver, it just wasn’t the one that everyone expected them to take. In most mock drafts and predictions, it was supposedly well-known that (if he was still on the board) the Eagles would select Justin Jefferson from Louisiana State University. When it came time for the Eagles pick, Justin Jefferson was still on the board, except the funny thing is that they didn’t select him.

Instead, the Eagles went with Jalen Reagor out of Texas Christian University, who wasn’t expected to be picked until at least the second round. General Manager Howie Roseman went with his gut feeling instead of what the fans wanted. The Cowboys didn’t do the Eagles any favors when they selected Cee Dee Lamb out of Oklahoma with the 17th pick, as Lamb is generally considered one of the best wide receiver prospects in this class. The Cowboys didn’t have a glaring need for a receiver but decided to take him anyway, possibly to hurt the Eagles.

While it’s not what Eagles fan wanted, the Reagor pick makes sense. While he’s 5’11 compared to Jefferson’s 6’1, he ran his 40-yard dash at his virtual combine in 4.22 seconds, which is elite. However, Reagor ran only a 4.47 at the Draft. Reagor blames his score at the combine on gaining 10 pounds. Justin Jefferson ran his in 4.43 seconds at the combine. The Eagles are hoping that Reagor can become the second coming of a healthy DeSean Jackson

In Round 2, Eagles fans were even more shocked than they were in Round 1. For their second-round pick, many expected the Eagles to either draft another wide receiver or a linebacker. Instead, Roseman decided to draft quarterback Jalen Hurts out of Oklahoma. You read that right: a quarterback! This comes one year after signing Carson Wentz to a contract with $107 million dollars guaranteed.

Despite the backfire from fans for drafting a quarterback so early in the draft when they already have one, the moves make sense. While Wentz has been often tremendous for the Eagles in his four years with the team, he has been injured various times. Even though Wentz played this whole season, he was absent for most of the playoff game against Seahawks in the Wild Card Game in which they lost. In Wentz’s place was 39-year-old backup Josh McCown. Put Jalen Hurts in that situation and the Eagles will most likely have been in a closer game. However, the Eagles don’t plan to just use Hurts on the bench. Doug Pederson talked to reporters and explains what he’s envisioning with Hurts.

“With Jalen Hurts, he has a unique skill set,” Coach Pederson told reporters. “You see what Taysom Hill has done in New Orleans, and now he and Drew Brees have a connection there and a bond there, and you even look at when [Joe] Flacco and Lamar [Jackson] in Baltimore for the short period of time—how they gelled together. It’s just something we’re going to explore.” (Bleacher Report)