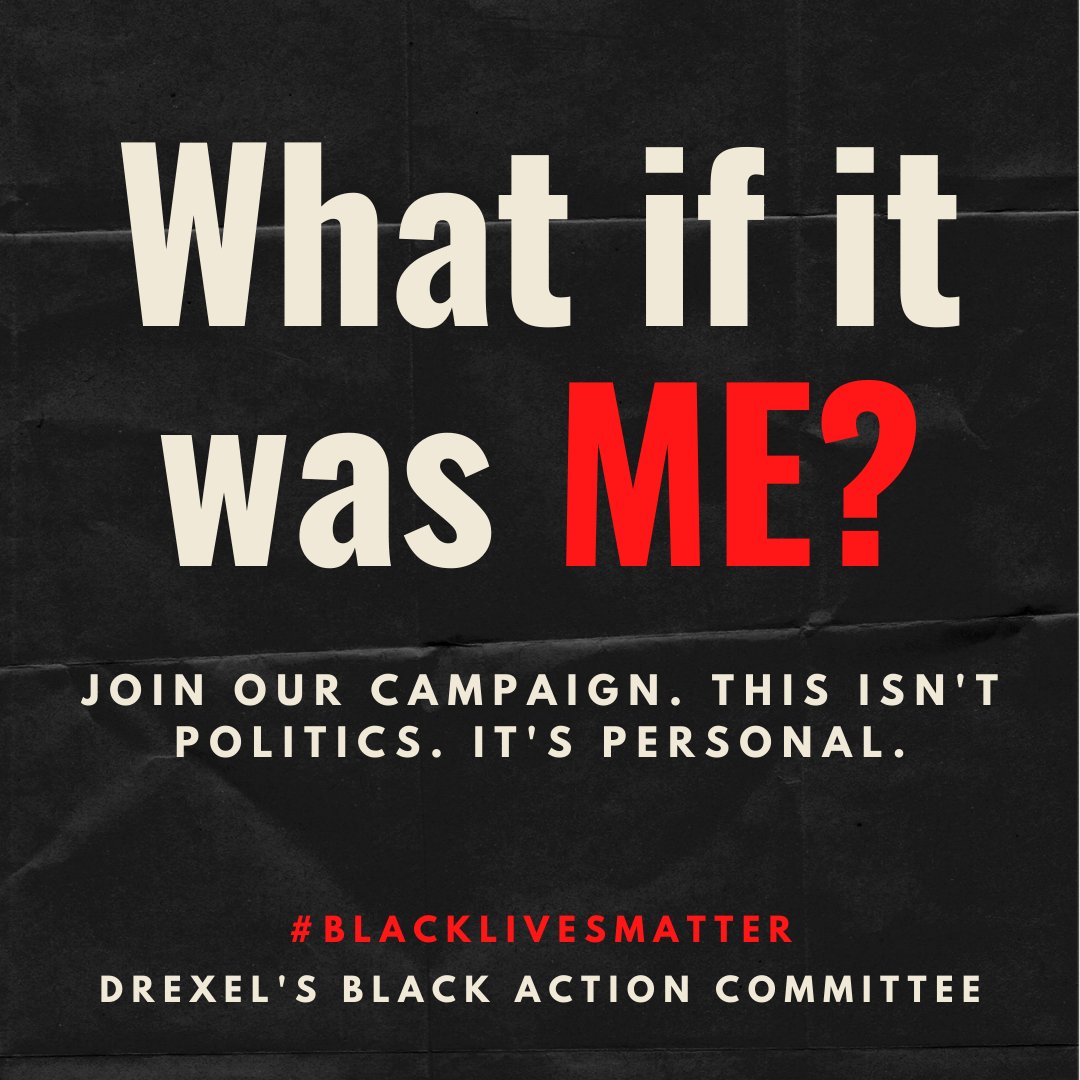 Drexel’s Black Action Committee is a Drexel student organization focused on activism and community service. In the fight against the depersonalization that arises from systemic racism, DrexelBAC has launched a visual campaign titled ‘“What if it was ME?“’ The campaign is designed to ask people to individually submit videos following an answering template, in a wholehearted attempt to strike home the impact that systemic racism can have on your life — and why it looks different based on who you are.

Ethan Hermann: When coming up with the “‘What if it was ME?“’ campaign, what sparked it to be a visual campaign?

Drexel’s Black Action Committee: We knew we had share something to do our part in this movement. We felt a visual campaign would really make the impact we wanted because at a time when all information is being shared virtually, seeing a face makes it that much more personal. We wrote in the summary of our campaign that we want to combat the depersonalization and isolation that is used to try and pacify people who are angry at injustice.

You look at the news and they’ll describe it as “an isolated incident” or “the death of a black person,” rather than recognizing that these are connected acts of violence against people. People who are part of communities that have names and loved ones.

EH: Do you feel that seeing people’s emotions when discussing race & systemic racism makes a larger and/or deeper impact?

DrexelBAC: Absolutely. Even though all the posts, whether text, picture or video, may say the same thing and are all helping the movement, you have two different reactions when you see the text reposts on your timeline and when you see the pictures and videos of protesters and celebrities such as Keke Palmer, John Boyega and Kehlani speaking up and taking part. You feel the gravity and severity when you see the moment of silence on Nickelodeon more than when you read their statement online.

EH: There was clearly a lot of thought put into the template for creating your own video submission. How did DBAC reach that final template?

DrexelBAC: We spent a lot of time as an EBoard coming up with the template. We thought of what message we wanted to give, what the title would be, and the graphic to go with it. We ran the campaign and the wording of the instructions by our peers and other student leaders as well. When we felt comfortable with it, we shared it.

EH: Was there any discussion regarding the wording and/or order of what to say to create a bigger and more powerful impact?

DrexelBAC: We wanted to make sure that the submissions would stay uniform, as unity in campaigns and protest are essential. When the stories of police brutality and racial violence surface, many people will respond with all types of excuses as to why it happened. It’s easier when it’s someone they feel is far removed from them.

But what if it was someone you knew?

The first half of the prompt aims to make people think about that by having people say their name and something that identifies the-m. And the last half outlines why people’s initial way of thinking is so harmful by having the speaker question why the response is different for people of different races.

EH: Do you plan on compiling all of the response videos you receive into one master video?

DrexelBAC: We do. Part of the campaign will be to share the videos individually on various social media platforms. The plan is to then compile all the videos into one to upload onto our YyouTtube channel to share.

EH: Does DBAC plan on sharing the final amount of submissions with the Drexel University administration?

DrexelBAC: Of course. This campaign is open, as the issue it addresses well surpasses our Drexel community, so anyone can submit. But we intend to bring it to the attention of our Drexel community because it affects us. There are Black and Brown students at Drexel that need the support of their university.

EH: Is there anything you would like to add about your campaign [DBAC’s core values, DBAC’s inherent focus moving forward, etc.]?

DrexelBAC: Drexel’s Black Action Committee hasdid, does, and always will support our Black community at Drexel, in Philadelphia, and worldwide through activism and community service. We’d love for everyone to take part in this campaign and to be sure to follow us to keep current with all of our other actions plans and events.