Race Street Lawn was transformed into a one-day concert venue for the first Lawn Jawn May 18.

About 150 students basked in the 80 degree sun on beach blankets, surrounding a large stage, which would host seven bands. The free, Drexel University-based festival started at 2 p.m. and presented several local bands, along with those who are involved with the MAD Dragon Music Community record label. Artists in attendance included j solomon, Scarlet Cimillo, Mega Mango, Strange Weekend, Nematode, Z by Z and Del Water Gap, along with DJ sets from Martin, Spendenn and Nico Oso.

Kaylie Minogue, a junior at Drexel and head of the student-based concert organization Flux, went into depth on how the Lawn Jawn came into existence.

Minogue explained how she wanted to give local bands, who normally play in cramped, sound-deprived basements, the opportunity to play live on a stage with quality sound equipment and stage management. This meant bands were able to play using high-end equipment and clear amplifiers. Most of the event was created and organized by students, and in the future, Lawn Jawn will hopefully be 100 percent student-run.

Complementing the “lawn” aspect of Lawn Jawn, Jesse Moldovsky of the opening band j solomon enjoyed playing at an outside venue, saying “it adds a whole other element to performance.” J solomon, whose fellow members are Jack Lichtenstein, Jason Herrick, Richard Pichura and Danny Scerbo, is a local Drexel band in the underground music community.

Moldovsky added that, despite the competitive nature of the music industry, the local band circle of Philadelphia is very welcoming and inclusive.

He also explained how important it was for j solomon to be able to use Lawn Jawn to be central and relevant on campus.

Following j solomon was Scarlet Cimillo, a recording artist for MAD Dragon. The label gives Cimillo creative freedom but takes over tasks such as marketing so that she can focus on making music. The label also funds projects Cimillo would not normally have the financial means to accomplish. MAD Dragon discovered her last Oct. after performing at Wahoo’s, the local bar and restaurant.

“They took me in with open arms,” Cimillo said.

Her new EP, which was released last week, featured Z by Z. Nematode will also be working with her on future music. She performed music from the EP, which brought a pleasant ambiance to the afternoon that still had a large line-up to follow.

Mega Mango, an indie rock band made up of Drexel students, preceded Cimillo with a large supporting crowd of fellow music industry students. Mega Mango has a strong following on Drexel’s campus, as the band members are very active in the local music scene.

Strange Weekend performed around 4 p.m. The New Jersey native band included Oliver Turiano, Aidan O’Connor and Simon Ogilvie. The band brought a punk element to the festival, radiating fast drums and guitar riffs throughout the surrounding neighborhoods. They were joined when two fans launched themselves onstage and danced alongside the band. The two boys were friends of the band and also seemed to be some of their biggest fans. 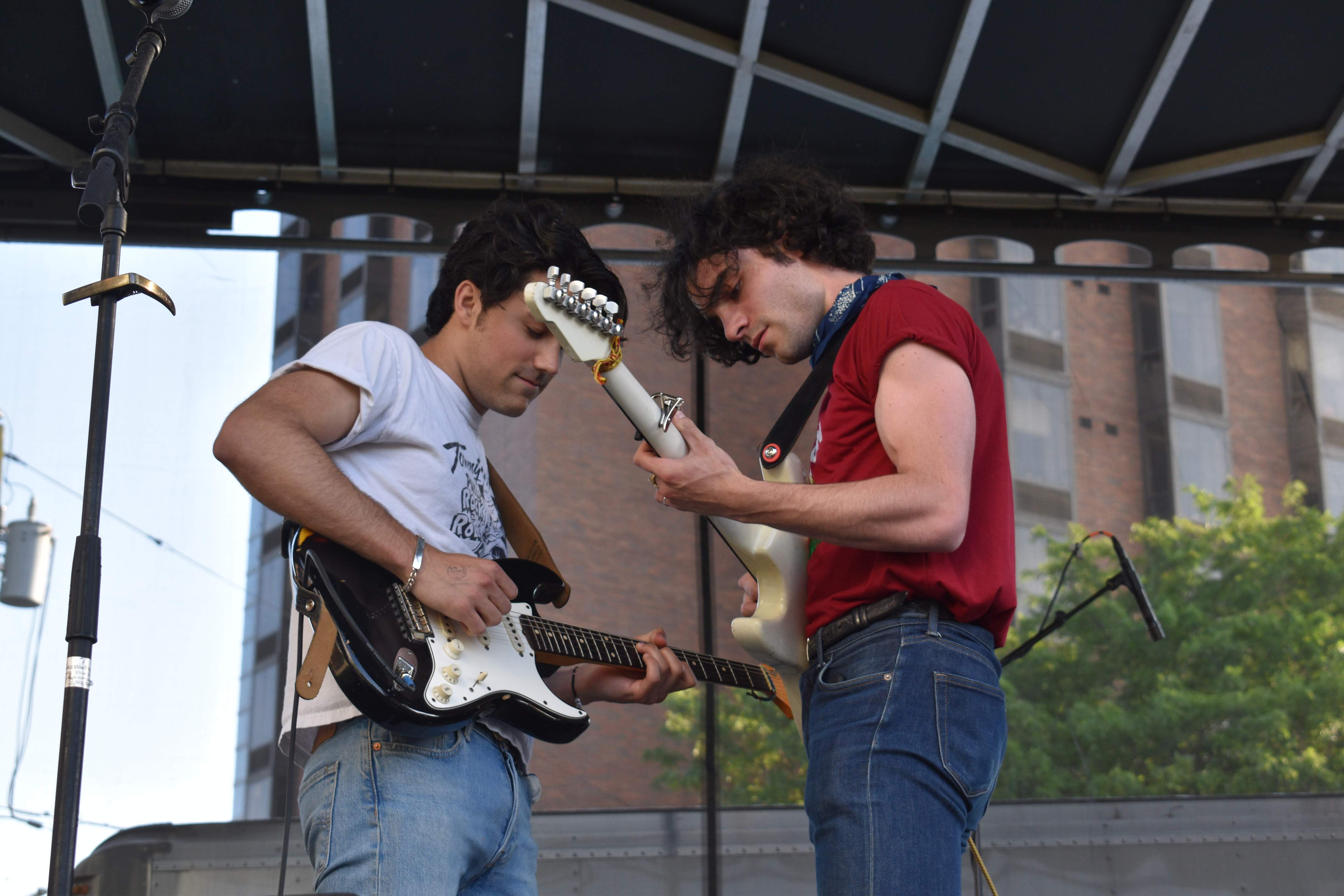 Ogilvie, singer and guitarist of Strange Weekend, was thankful to have the resources Lawn Jawn and Flux offered them. “This is the most professional sound setup we have ever had,” Ogilvie said.

Following Strange Weekend was Nematode, a psych-rock band from Philadelphia made up of Aaron Mughannam, Larry Flatley, Mike Downey and Kazim Zaidi. They said Mad Dragon, similar to Cimillo’s experience, has been very open to giving Nematode control of their own projects. They have an album in the making with the label. They compared their experience with the local music scene in Philadelphia to the experiences they had with local music in San Francisco; the music community in the Drexel area is smaller, but all artists involved are very close because of this.

The final band and headliner, Del Water Gap, drew in a crowd that unanimously described them as “everyone at Drexel’s new crush.”

The band’s frontman and writer, Holden Jaffe, explained how he wanted his music to create “arena intimacy,” an element created through the indie-pop music they played at Lawn Jawn.

The name “Del Water Gap,” was a topic of discussion throughout the crowd. Jaffe confirmed he came up with the name after reading several road signs for “Del Water Gap” while driving from New York to Pennsylvania with a noise rock band.

Jaffe emphasized how much fun the band had at Lawn Jawn and how top-notch the production of the event was. Their set brought the festival to an end around 7:30 p.m., just as the sun was setting on a day that was jam-packed with music.

The festival-goers described the event as a great time that brought good vibes to Drexel’s campus. Lawn Jawn drew in a crowd and publicized local Philadelphia artists on a platform larger than any other venue they have played, thanks to MAD Dragon and Flux. Minogue was ecstatic to announce the event’s success and plans on hosting it annually.