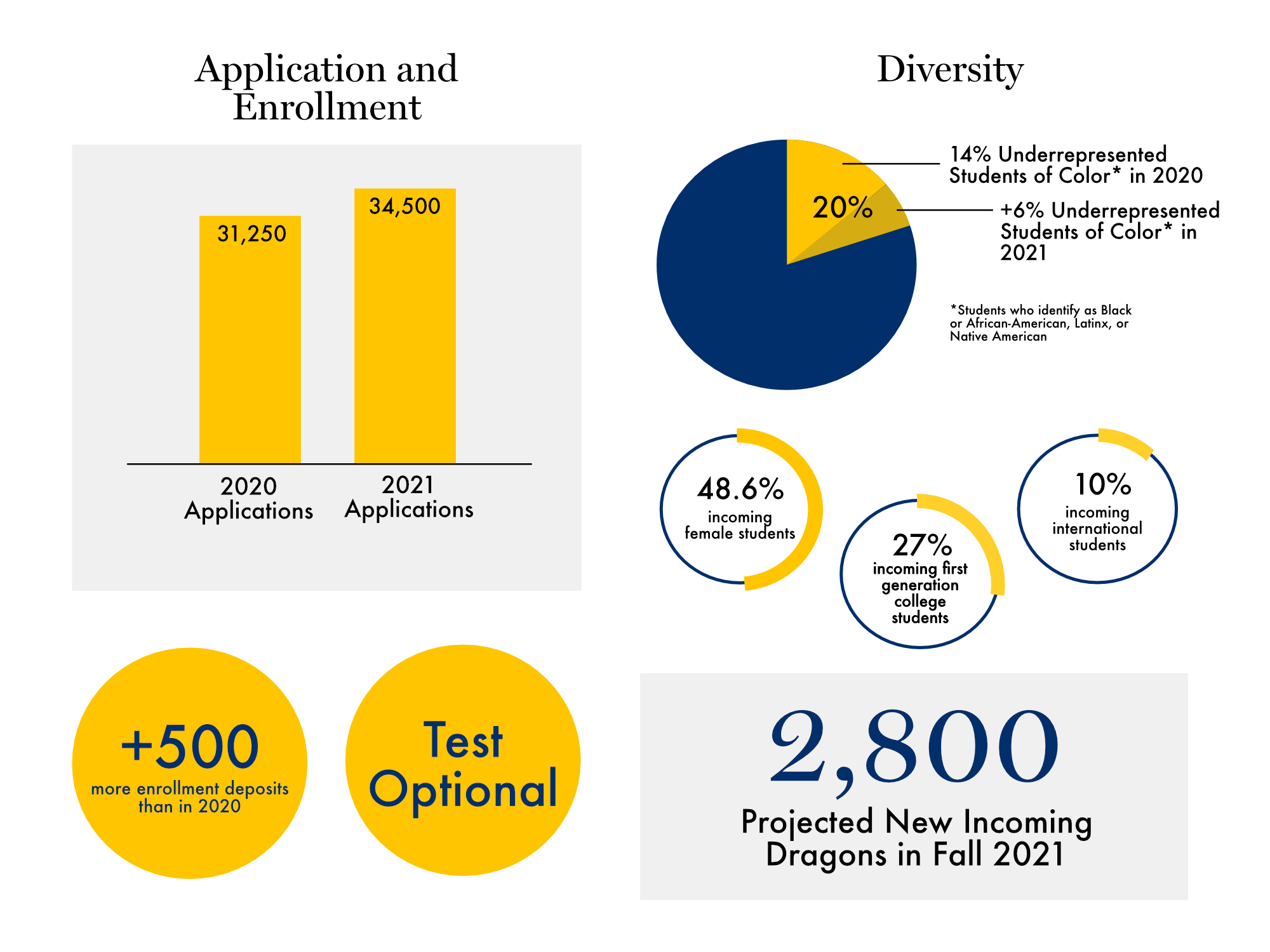 Despite a year of unprecedented circumstances, Drexel received a 10 percent increase in applications and 3,136 active confirmation enrollments as of May 7 for the incoming undergraduate class of 2025/2026. As a result of the pandemic, the admissions office adjusted some of their policies and outreach strategies to students and families, among those being a test optional policy.

“A lot of that, I’m sure, can be attributed to some of the efforts and a lot of the new initiatives we’ve put in place this year,” Evelyn Thimba, Senior Vice President of Enrollment Management, said in an interview. “We also went test optional this year, and we think in some terms that that also helped increase the number of students who applied.”

Drexel received 500 more enrollment deposits this year than the university did last year. By the fall, Thimba remarked that the projection for the incoming class will be about 2,800 students.

The gender distribution for the upcoming class is similar to last year’s, which was 48.6 percent female students, according to DrexelNow. Additionally, 20 percent of students who have confirmed their enrollment identity are underrepresented students of color, as compared to about 14 percent last year. Thimba clarified this demographic can be defined by students who identify as Black or African-American, Latinx or Native American students. Of the confirmed students, 27 percent are first generation college students, an increase from last year’s 26 percent.

The incoming class will be made up of around 10 percent international students, which is generally the same number Drexel has every year.

“Last year, even though about 10 percent confirmed, far fewer ended up enrolling in the fall. We think this year we will have better conversion rates in terms of students actually showing up, but there’s still the visa process that students need to go through,” Thimba said. “With COVID there’s still a lot of Visa-granting offices and consulates that are closed except for emergencies. We are all watching that number real closely, but our incoming, the number of students who are international and have confirmed their enrollment, is about 10 percent of the class.”

Thimba commented on how the COVID-19 pandemic and associated policy changes have affected the admissions process. Admissions officers tried their best to accommodate with circumstances and reach out to students and families through virtual resources.

“We in the Admissions Office did everything we could to identify and remove any barriers for students this year in terms of making sure that our admissions process was as flexible and seamless as it could be because we knew just how difficult a time these students were having,” Thimba said.

The admissions office took into account that students did not have the opportunity to visit Drexel on campus or easy access to their guidance counselors, and were conscious of that in their decision-making, communication with students and application requirements. Thimba believes that, because of many of the changes made, they were able to increase the number of students who applied to Drexel.

Among the new initiatives was hosting many live option sessions as opposed to pre-recorded sessions to have students better connect with the university. The optional testing policy which was implemented for this class will also be continued for the next two years as a pilot, due to its success this year.

“The silver lining of all this is that we at the admissions office at Drexel — and this is not unique to Drexel, this is across the country — have learned different ways to reach students and their families. Many of the options we have will continue to be offered,” Thimba said. “We had access to students who we don’t usually connect with and students also had much more of a front door to the university through the virtual offerings that they didn’t have unless they actually visited us in person.”

Thimba and the admissions office are very impressed with the resilience of the incoming class in spite of the obstacles many have faced in the past year, and is excited to welcome them to the university.

“We are excited for every incoming class, but this class has been tried, and they are in many ways trailblazers in terms of the way that they have conducted their college search and also selected their final academic home,” Thimba said. “So we are so excited for what they are going to add to our campus fabric. I think they are inspirational in many ways and we’re just thrilled they’re going to be joining the Dragon family.”