“The Boys” gives fans more of the same in season 2 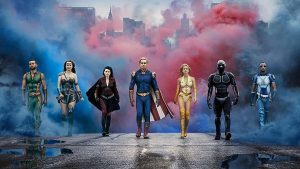 The second season of “The Boys” gave fans more of what made the show’s first season so popular and acclaimed. The show delivers in spades on its identity as a superhero show for adult audiences, and serves as a grittier and more complex response to the more watered-down mainstream superhero content that has dominated the box office for the last few years.

The show also doubles down on its political commentary. Some of the #MeToo movement commentary that last season provided is still present. However, this is largely left behind in favor of focusing on white supremacy as a major source of conflict in the show. Without entering spoiler territory, the show makes some bold choices in how it explores this theme.

It continues its not-so-subtle commentary on Hollywood and corporations. There are several scenes that strongly feature the brands of the supes and the public opinion surrounding them, as well as some of Vought’s media stunts. However, there was also a strange trend this season referencing current or recent pop culture trends(eg. Ed Sheeran, Hamilton, Pewdiepie) that felt like they broke some of the world of the story a little. It seemed to be done in an attempt to make the world feel more similar to the real world, but fails to do so.

There are many parts of the show that I found dragged, and a few plot threads that were started but were either dropped or didn’t go anywhere meaningful. However, there were a few other storylines and characters that were much more compelling, which made it easier to sit through some of the less interesting moments. The season culminates by bringing the best elements of the season together in a very satisfying climax. This, more than anything, was what I found to be season two’s greatest success.

Every major character from season one is back, along with a couple notable newcomers. Homelander, Butcher and super newcomer Stormfront get the most attention, or at least have the most satisfying progression this season. Starlight, Maeve, Becca, Huguie, Kimiko and newcomer Victoria Neuman also play big roles and have a few compelling storylines and memorable scenes. Other supporting characters like A-Train, The Deep, Mother’s Milk, Frenchie, Black Noir and Mallory come back as well in about the same capacities as season one.

If you were a big fan of the first season, I would highly recommend watching this if you haven’t already. If you, like me, watched season one but don’t necessarily consider yourself a fan, there are some improvements here , but there will probably be parts that you find a bit boring. On the whole, this season was a good continuation of the show in a lot of senses even if it was still lacking in some areas.