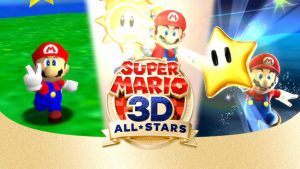 COVID-19 may have shifted their plans a little bit, but Nintendo still found a way to celebrate the 35th anniversary of the “Super Mario” series in the form of the “Super Mario 3D All-Stars” collection for Switch. The compilation — expected months ago due to leaks and finally revealed in a Direct — brings together the first three 3D entries in the series: the groundbreaking “Super Mario 64,” oddity “Super Mario Sunshine” and the beloved “Super Mario Galaxy.” Each has been upscaled for modern TVs and given small changes to adapt to Joy-Cons, and while you do get three games for the price of one, that may not be enough for some ardent fans.

Of the three, “Super Mario 64” is probably the one to most tap into fans’ nostalgia. The Nintendo 64 launch title is widely considered to have set the standard for not only 3D platformers, but 3D games as a whole. It’s a landmark title, proving that the formula could be translated from a side-scroller to a more open world; it’s certainly worthy of being preserved for future generations. As a first attempt, it’s a monumental achievement. As a game to play… well, it’s a little rough.

Time has not been kind to “Super Mario 64.” The graphics have aged to the point where they’re charming rather than dated; textures still remain blurry at times and Mario remains a vague assortment of polygons. The camera, meanwhile, is kind of awful. Yes, it was a first attempt, but plenty of reviews at the time took issue with it, and other than adapting it for the right stick, it’s largely the same. It will frequently move to a spot where you can’t see Mario, making jumps harder. Finding the right angle often seems impossible. The act of running around and jumping is still pretty fun, but there’s no denying that Mario feels way too heavy, the moves imprecise, flying too stiff. Granted, it hasn’t become unplayable — you’ll still get some fun out of it even if you’ve never seen an N64 in real life. But there’s no denying that it could have benefited from a little enhancement or modernization, at least in the camera.

Six years passed before “Super Mario Sunshine” came out; understandable, given the rapturous acclaim given to “64.” As time has passed it’s acquired something of a black sheep status, the “weird” one of the 3D games (or even “the worst”). Reports of its badness are largely unfounded. Yes, it takes place on a tropical island; yes, you do have a jetpack/pump (F.L.U.D.D); and yes, it does have more plot than these games require. But looking past all that, “Sunshine” is a singularly interesting experience, the result of Nintendo breaking up the typical trappings of a Mario game and trying something new. Instead of stars, there are Shine Sprites. Isle Delfino remains a beautiful experience; the water especially has aged great, and the tropical soundtrack is catchy. Even the largely F.LU.D.D.-centric gameplay yields some unique and creative challenges, and the controls are tight and responsive.

All of it feels amazing right up until you encounter the “Old-School,” F.L.U.D.D.-less sequences, and then everything goes to hell. Mario moves fast, and pulling off different jumps is quick and seamless, but ironically the pure platforming levels are some of the worst in the game due to the wonky physics system. Sometimes you seem to move one step more than you need. Others it seems as if your momentum is all off. The game feels as if it was designed for F.L.U.D.D., but these problems even bubble up with the hover nozzle, where trying to make finite movements becomes a pain. It’s combined with a camera that, though showing a silhouette when you’re obscured, still manages to find angles that can turn progress into an ordeal. These problems might be easy to overlook, but the fatal flaw of the game is that to get to the end you must beat the first seven levels of each area. This means, at some point, you are going to have to play a level that feels nearly impossible. While it’s understandable from a story point of view, it makes the extra Shines around Delfino hub borderline redundant, because even if you can unlock all the worlds early, you still have to run those god-awful platforms. Speaking of story, this was the first game with fully-voiced cutscenes. Yeah, there’s a reason they only speak one or two words max now; “Breath of the Wild” this is not.

If “64” was a first draft and “Sunshine” was an overcorrection, “Super Mario Galaxy” is the first 3D entry that feels like they cracked the code. Perhaps even more than “64,” this Game of the Year winner was one of the most anticipated titles in the collection (its sequel, sadly, hasn’t been included). A few minutes is all it takes to understand why: from a pure presentation standpoint, this is one of Nintendo’s crowning achievements.

On the Wii it was a marvel, and seen today it’s downright stunning; beautiful visions of Star Bits (which you can collect for more lives and shoot at enemies or Hungry Lumas) falling, the unique design of the planets, it’s just a great-looking game. A big part of that is the auto-camera, which locks into a specific view and follows you as you jump from planet to planet. Of course, some quirks are still present here (mainly that you can’t rotate it at times where it feels like you should, making some jumps precarious) but by and large it’s shockingly good. The big gimmick here is gravity, allowing you to run underneath planets and jump between bodies, an effect that still lands. You also get a spin attack by shaking the Joy-Con (or pressing a button, a big shift from the Wii), which helps alleviate problems made with jumping on spherical surfaces, but there are some rare cases when movement seems harder than it should be. And then there’s the fully orchestrated score, which makes everything feel even more epic and grandiose.

This is a game where so many elements are coming together perfectly that even the numerous sequences where you launch yourself to a new planet feel transcendent. It’s the combo of a perfect twinkling sound with awe-inspiring camera movements. If you wanted to nitpick, it’s a little too easy throughout, and the story is basic even though there’s a (more emotional than it should be) side-story you can find if you choose. This is a game that’s continuously surprising, an example of the experience only Nintendo can bring, and certainly deserving of its rep as “one of the Best Marios Ever.”

None of these games have changed much, and that’s the biggest problem with this collection. It’s an incredibly bare-bones release, only including soundtracks for each game (but only inside the actual software, no download codes or ways to export it). There’s not even a manual included, the move and action lists being shunted off to a menu you can access with the “-” button. On top of that, Nintendo is selling this collection for a full $60, and only until March of next year (even for the digital version!).

Controls have been tweaked for the Switch but only to adjust for various differences in controllers (and in “Galaxy’s” case, allowing the spin move to be executed with the Y or X buttons). Granted, they have been upscaled slightly, running in an emulator according to some forums, and these games are all 10+ years old at this point. But the last All-Stars collection for Wii was about $40, and it included four games plus a music CD. Nintendo didn’t have to fully remake these games, but they could have at least added some more material for an anniversary. If you still have your original consoles, there’s no real reason to get this unless you really want to play them on the go. For anyone who sold them or hasn’t played before, these are solid ports that replicate the originals, for better and for worse, and worth trying if you need more Mario in your life. Let’s just hope Nintendo isn’t angling for the “Disney Vault” method any time soon.