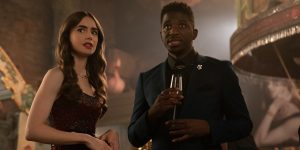 Netflix invited its watchers on a trip to Paris on Oct. 2 with the release of the new series “Emily in Paris,” created by Darren Star. Star is most well known for his previous series “Beverely Hills, 90210” and “Sex in the City.”

The new series opens with Chicago girl Emily Cooper (Lily Collins) receiving the unrealistic opportunity to work as a social media strategist for French company Savoir. Emily has no knowledge of the French language and was only given this chance because her boss, Madeline Wheeler (Kate Walsh), suddenly became pregnant. She naively accepts the job and blindly moves to Paris, leaving her previous life and boyfriend behind.

Once Emily arrives in Paris, she makes a mediocre effort at best to assimilate into the French culture, taking a beginner French class. However, she relies on everyone around her, especially her coworkers (who are fluent in French), to speak English, barely picking up any of the language through her day-to-day experiences. It is interesting how Emily flexes her master’s degree in communications when she can’t even communicate with her coworkers.

Emily is not well-liked upon her arrival because she always pulls the “token American” card and immediately makes an enemy of her boss, Sylvie (Philippine Leroy-Beaulieu). Sylvie views Emily as a useless American who doesn’t actually have anything to contribute to the company, and most of the series is wasted on a petty battle between the two. It’s the usual “snotty Parisian versus ignorant American” trope.

The series attempts to portray the French as having a work-life balance that consists of more pleasure than work, as opposed to the American balance of more work than pleasure. This attempt fails miserably when the portrayal of “pleasure” transformed from showcasing an easy work-life balance to displaying various different affairs per episode.

Since it does take place in Paris, some of the stereotypical scandal is expected. Viewers may be forced to bend their morals if they choose to root for the budding romance between Emily and lead love interest Gabriel (Lucas Bravo). Gabriel is everything a young, impressionable girl could want in a man for a foreign love affair. He’s handsome, he’s a good cook and he loves to swoop Emily off her feet. Yet Emily and Gabriel’s situation becomes very sticky once Emily unknowingly befriends his girlfriend.

The series is very light-hearted and fun, but it can come across as worn out since there isn’t anything unique to the plot. Still, if a viewer is looking for a little bit of chaos, Parisian culture (though an inaccurate depiction) and romance, “Emily in Paris” may be the right fit.